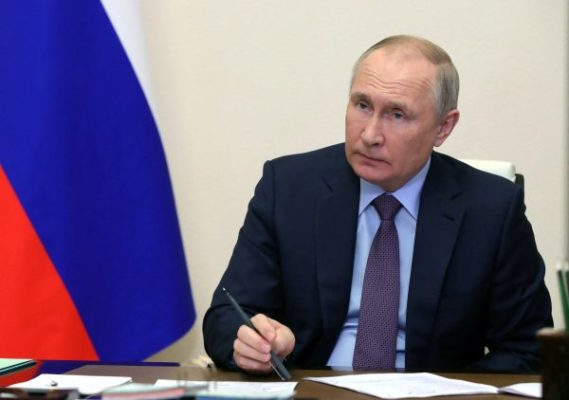 This article is an onsite version of our Europe Express newsletter. Sign up here to get the newsletter sent straight to your inbox every weekday and Saturday morning.

Welcome back. A record-breaking heatwave, the end of the Mario Draghi era in Italy, the Conservative party leadership race in the UK — it’s been quite a week in Europe. I’m at tony.barber@ft.com.

What caught my eye was the news on Wednesday that Ukraine, with the agreement of its western government creditors, will suspend debt repayments until at least the end of 2023.

It’s a timely reminder of the economic dimensions of Russia’s attack on Ukraine. The war is not only an assault on Ukrainian identity and a land grab — though, if there were ever doubts on that score, Russian foreign minister Sergei Lavrov surely laid them to rest this week.

The war is also a severe test of the economic resilience of Ukraine, its western backers and Russia. So I’m looking at how well, or badly, everyone involved in the conflict is holding up.

There’s little doubt that Ukraine is the hardest hit. The debt announcement marked a U-turn for Kyiv. Previously, it had vowed to meet its obligations in full, whatever the war’s cost.

But now the country’s budget deficit is running at roughly $5bn a month. The US Treasury fears that the authorities are ravaging Ukraine’s public finances by printing money to cover the gap. Tens of billions of dollars in western aid are needed to reverse the slide towards inflation and economic disorder.

What’s the damage to Ukrainian economic output since the Russian invasion in February? In a persuasive analysis for voxeu.org, Mihnea Constantinescu, who is head of research at Ukraine’s central bank, Kalle Kappner and Nikodem Szumilo estimate that economic activity slumped by 45 per cent at the start of the war but recovered to around 85 per cent of prewar levels in April. That’s still a tremendous hit.

But the authors make an important point. Russian-occupied regions such as Kherson, north of Crimea, contribute much less to national output than the Kyiv region, which accounts for almost 30 per cent of gross domestic product and withstood Russia’s attack.

Finally, I draw your attention to this Lex column in the FT on Ukraine’s postwar reconstruction. Prime minister Denys Shmyhal predicts Ukraine’s recovery will cost $750bn. That is almost five times as much as the US committed to western Europe’s recovery after the second world war — and it may be an underestimate.

EU economies and the UK are struggling, too, but nothing like as much. In its latest forecasts, the European Commission says eurozone inflation will peak at a record 8.4 per cent in the third quarter. But real gross domestic product growth will be 2.6 per cent this year and 1.4 per cent next year.

The central question is how Europe will manage its energy needs in winter if Russia stops delivering gas. The IMF said this week that a Russian embargo would send the Czech Republic, Hungary, Italy and Slovakia into slumps of more than 5 per cent of GDP next year.

Data from Eurostat, the EU’s statistical agency, illustrate the EU’s reliance on Russia for gas, oil and coal:

Analysts at Deutsche Bank are gloomy about Germany, which is heavily dependent on Russian gas. They predict a recession later this year. Most worrying is the impact of any Russian gas embargo: “In a ‘tap remains turned off’ scenario, we expect a rationing of gas leading to a GDP slump between 5 and 6 per cent in 2023.”

The UK’s outlook is dark because of many of the same factors affecting Europe, but also because its trade is suffering from Brexit and productivity levels are chronically low. The Office for Budget Responsibility, an independent authority, says real disposable incomes will fall by 2.2 per cent in the 2022-23 financial year, the largest annual decline since records began in 1956-57.

To sum up, everything depends on whether European public opinion can be persuaded to continue supporting Ukraine during an economic crunch at home. Political leadership of a high order will be needed.

The Kremlin is putting the Russian economy, including the private sector, on a war footing for the long haul. Unveiling a raft of new measures, deputy premier Yuri Borisov said their purpose was “to guarantee the supply of arms and ammunition”.

Much debate in the west centres on the extent to which sanctions are weakening the Russian war effort. Here’s another article on voxeu.org, by Mark Harrison, emeritus professor of economics at the UK’s University of Warwick.

He contends that sanctions are working because they are cutting Russian imports and causing capital flight. “Russia’s economy is suffering arterial blood loss at an increasing rate.”

But isn’t Europe still paying Russia billions of euros for energy supplies? Harrison says it is a misunderstanding to think this money is funding Russia’s war effort. Instead, idle balances of foreign currency are accumulating. “If they cannot be used to import resources into Russia, they are not paying for Putin’s war.”

Perhaps what this tells us, though, is that Russia is reserving its most advanced technology for the war effort. There are few if any signs that the Kremlin is thinking of winding down its war.

We are almost reaching a point where Mother Earth is going to shed humanity as an old skin, rid itself of all of us — European Green Deal commissioner Frans Timmermans

Tony’s picks of the week

Alarmed by Russia’s war in Ukraine, multinational companies are reassessing how a conflict between China and Taiwan might affect both their operations in East Asia and the global economy. The FT’s Kathrin Hille sets out the stakes

Armenia and Turkey, which have a long and often painful shared history, are taking tentative steps towards normalising their relations, writes Olesya Vartanyan for the International Crisis Group, an independent body specialising in conflict analysis