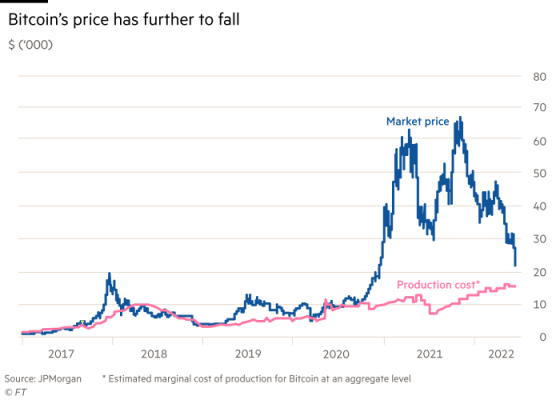 Crypto enthusiasts have long lauded their currencies over fiat ones partly as protection from inflation. A surge in the latter, due to energy costs, has not only benefited the dollar this year but also swelled the costs of creating crypto staples such as bitcoin.

Meanwhile, crypto prices have gone the other way. As key central banks aim to combat price inflation by boosting interest rates, speculative investments have crumpled in value. Bitcoin has more than halved this year to nearly $21,000.

That, in turn, encourages bitcoin “miners” — owners of the computers used to crack complex calculations that create new coins — to throw all available processing power to make more and maximise cash flows.

The catch is that as more processing power is dedicated to mining, it becomes harder and costlier to create each new coin. Total processing power in use, called the hash rate, is currently at 220mn terahash per second, near its all-time peak.

That might sound counterintuitive while prices are falling but bitcoin miners have bills to pay. Though modern mining rigs (essentially, computers) are about 30,000 times more efficient than a decade ago, this energy-intensive process remains the costliest input.

A high hash rate signals that many miners have begun to capitulate, thinks Nikolaos Panigirtzoglou at JPMorgan. He calculates that the average marginal cost of mining each bitcoin coin has climbed to $15,760, about double over the past year to a record high. Almost all of that relates to the electricity needed to power computers.

If bitcoin prices keep falling they could drop below estimated marginal production costs. This has happened before in 2018 and 2020 and the result was swaths of miners going out of business. A sustained fall in the hash rate followed.

As with commodities, a market price below the costs of production can offer a buy signal. But that price floor could give way as crypto miners give up, causing marginal costs to decline. Unlike commodities, no real world demand exists for bitcoins. Beware of catching falling knives.

Fed to Keep Interest Rates Above 4% Beyond 2023, Economists Predict