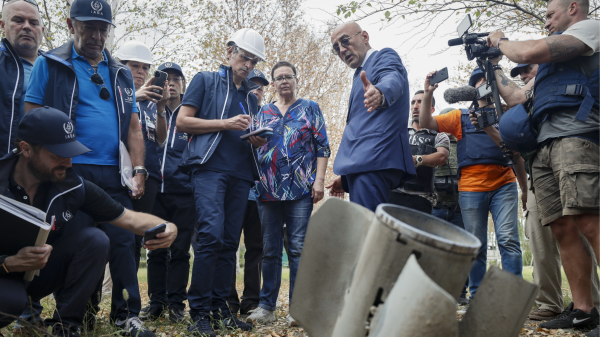 Rafael Grossi was strikingly blunt for a diplomat. “We’re playing with fire,” the head of the International Atomic Energy Agency told the UN Security Council this week. “Something very, very catastrophic could take place.”

Four days earlier, Grossi had returned from the Zaporizhzhia nuclear power plant in southeastern Ukraine, the biggest atomic facility in Europe, which has been continually fought over since it was captured by Russian forces in the early days of its Ukraine invasion.

There he observed Russian military vehicles parked in the turbine halls, talked to the facility’s harassed Ukrainian staff and documented damage to the plant, including to areas used to store fresh nuclear fuel and radioactive waste. Grossi and the other inspectors even had to shelter from a fresh round of shelling during their visit.

The huge plant, which opened in 1985, a year before the meltdown at the Chernobyl nuclear facility north of Kyiv, is at the centre of a high stakes hostage battle that has become a symbol of the wider risks of President Vladimir Putin’s invasion, now into its seventh month.

It is the first time a war has been fought around an active nuclear plant and the first ever seized by force. Grossi in his briefing stressed the risk of a “very serious nuclear accident” and called for a military free zone to be established around the facility.

“It shouldn’t blow,” Paddy Regan, professor of nuclear physics at the University of Surrey in the UK, said of Zaporizhzhia. “But I wouldn’t bet my life on it.”

Both Russia and Ukraine blame each other for the constant mortar and artillery strikes at the plant, which has six nuclear reactors. Shelling this week cut power to the nearby Russian-controlled town of Energodar that houses many of the plant’s 11,000 workers. Russian missiles also struck Nikopol, a Ukrainian-controlled town on the other side of the Dnipro river.

Mykhailo Poperechnyuk, a businessman and politician in Nikopol, said he often saw Russian forces firing missiles from the plant. “It happens all the time,” he said.

The protective casing around each of Zaporizhzhia’s 950MW reactors, built from reinforced concrete and one-foot thick steel, are designed to withstand the impact of an aeroplane.

But Paul Norman, professor of nuclear physics at the University of Birmingham, said “nothing is completely indestructible,” and that sustained and directed strikes would “most likely break through eventually.” In a worst-case scenario, experts say a rupture of the pressurised water containers around a reactor could spew out radioactive material into the immediate area.

The containment structures, and the fact that Zaporizhzhia’s reactors would shut down automatically in the event of failure, set them apart from Chernobyl, where a reactor explosion in 1986 scattered radioactive material — estimated to be equivalent to four hundred times that released by the Hiroshima and Nagasaki atomic bombs — over the Soviet Union and parts of Europe.

“Zaporizhzhia is not — nor could it be — another Chernobyl,” said Mark Wenman, a reader in nuclear materials at Imperial College London. “The reactor designs are fundamentally different.”

The big risk is a breakdown of its water cooling systems, leading to a nuclear meltdown similar to the 2011 Fukushima incident in Japan. The head of Energoatom, the Ukrainian operator of the facility, said this week that if this happened, the reactors would melt down in “about 90 minutes”.

Even if this did come true, experts believe Zaporizhzhia could contain the incident. “At Fukushima there was a melt through, but its reactors were of a different type, with thinner vessels,” said Norman, who believes a closer parallel is the 1979 incident at Three Mile Island in Pennsylvania.

“At Three Mile Island, which has broadly a fairly similar reactor to those at Zaporizhzhia, it didn’t fully melt through the thick steel vessel,” he explained. The IAEA has since classified Three Mile Island as a “level five” case compared with the more serious seven at Chernobyl and Fukushima.

Shelling this week damaged the Russian-controlled town of Energodar that houses many of the plant’s 11,000 workers © Alexander Ermochenko/Reuters

None of this minimises the chance of disaster, or the risk of human error by one of the Ukrainian technicians who operate the plant under the stress of Russian occupation.

“Weird things can happen at high temperatures,” said Regan. “Water can separate into oxygen and hydrogen, which can then explode in a kind of dirty bomb scenario.”

Ukraine needs the massive 5.7 gigawatt output of electricity generated at Zaporizhzhia, which is enough to power more than 4mm homes. But Russia also wants it, partly to strangle Ukraine’s economy and also because control of energy sources is central to its broad war effort against the west.

Russian attempts to divert the power towards Crimea, the peninsula it annexed from Ukraine in 2014, have been thwarted by Ukrainian missile strikes on the transformer substations. But shelling has also severed the facility from its own grid.

Energoatom this week said it was powering down the sole reactor that is still in operation, reducing the chance of an accident but also the strategic value of the power output.

Many Ukrainians suspect that Putin might deliberately seek to engineer a nuclear incident should the war swing decisively against him, especially as nuclear use forms part of Russian military doctrine.

“The Russians know how to do it, they really could do it — and they would just blame Ukraine,” said Valery Korshunov, founder of the European Institute of Chernobyl.

Neither side appears to be prepared to compromise over a situation that officials in Kyiv call blackmail.

“Concessions will never stop Moscow, they’ll only whet the Kremlin’s appetite for more,” said Andriy Mokhnyk, a nationalist Ukrainian politician and former ecology minister who, aged 14, watched Chernobyl explode from the balcony of his parent’s apartment 2km from the reactor.

“I experienced Chernobyl and know it’s possible to survive, but I don’t think the same is true of Putin’s genocidal attack on Ukraine.”